Physics and mysticism work like oil and vinegar, you have to shake them hard together to make a decent vinaigrette. Do we need vinaigrette to season our life? Does quantum physics explain consciousness?

“I wave therefore I am”

Today’s post-modern Western spiritual language uses a lot of verbiage taken from science, mostly quantum physics: frequencies, vibrations, energy, vacuum, waves, fields, quantum this, quantum that… Since the rise of rationalism, contemporary spirituality, especially in New Age movements, has made many attempts to bridge and reconcile the outer objective reality with the inner subjective world. As quantum physics lays down a non-linear and non-deterministic approach to reality, it didn’t take long for people to decide that the unmanifest and manifest meet at the quantum level by an act of consciousness, particularly as interpretations of Heisenberg’s uncertainty principle and Schrödinger’s cat. The infinite potential of consciousness and creativity operate at the level of waves and particles. Movies like “What the bleep do we know?” (2004) made quite a spicy vinaigrette of this notion.

When I find myself in the middle of a QWBC’s (read “quantic wanna be conversations”), I stand aside and observe quietly (turning myself into a discreet wave rather than a punchy particle). In general participants prove they have no idea about what energy, a wave, a frequency, a probability or differential calculus really mean. Many even confuse a sound wave with an electromagnetic wave. They speak quantum physics with a Newtonian mind. How could they not? Our common language has built itself on describing separated objects and causal relationships between them. Hence the fact one can access the deep understanding of quantum physics only through tough mathematical equations, not with everyday language.

Every time new scientific paradigms appeared in the past, people have twisted them in order to legitimate their current understanding of reality, from politics to spirituality to economics. When Newtonian physics appeared, many thought we could explain the whole universe through deterministic equations. If we could predict where a planet would appear next year, and at what speed an apple would hit the floor depending on which branch it falls from, didn’t it prove our capacity to forecast everything in a deterministic universe? Yet, people didn’t have access to the infinitely small (inert and living) that has quite different behaviors. They didn’t know Newtonian physics only applies to big, dead, inert objects. Determinism became a model for industrial society. When Darwin’s theories entered the main stream, natural selection turned into a motto in economics, claiming the natural domination of the fittest and that markets follow natural laws.

A few years ago I came across an ad from a 1917 newspaper. It promoted “pills of radioactivity” that could heal almost every forms of disease, from diarrhea to gout to malaria to whitlow. The article described radioactivity not as a physical phenomenon but as a thing you can eat, just like mashed potatoes or broccoli. Matter, time and energy had just unveiled some of their most intimate secrets. Well, not for everyone yet… 🙂

As you can see, history has shown how ideologies tried to legitimate themselves with the current scientific models, since the Renaissance. This same pattern applied to spirituality.

I don’t claim that science cannot ground or correlate our spiritual experience. Actually it does, and this should even remain one of its main objectives. However correlating and proving mean two different things. We lose science, rationality and spiritual insight each time we select some external objective phenomenology to prove the meaning of our inner subjective experience. We start with the conclusion –our experience– then we pick the relevant scientific material and discard the irrelevant one, to make our point. This cartoon on the right says more than a thousand words. Many contemporary spiritual movements do exactly the same as creationists (yet another spiritual movement), in their own way.

I really enjoy this interview. Ken nails down the flaws of today’s spirituality pseudo-scientific verbiage. He brings up 3 core arguments:

None of the original founders of quantum physics –all pure mystics!– claimed that individual consciousness has control over the duality wave/particle. They just talked about probabilities, waves, collapse… Actually their mysticism came from the abyssal untouchable nature of the reality they could sense under the veil of their equations. Science describes the manifest and tries to predict it, it leaves us in awe of that which produces the manifested reality (the field of meta-physics). Mystical experience infuses us not because of a solved mystery, but because of an unsolved one. We face the Great Mystery not because of the finite maps that science provides, but because of the uncharted territories and dimensions that our mind can sense without the capacity to embrace them. Only a wider consciousness can, beyond the mental. We then have to enter in meditative techniques.

2. Claiming that quantum vacuum equals spirit and gives rise to the manifest world through intention creates a duality. We fall back into phenomenology, with objects and causal relationships between them. Spirit becomes a “doer” doing something, in a dual world. It contradicts the very essence, suchness, is-ness of spirit. I like Wilber’s metaphor when he says wetness of the ocean has nothing to do with waves. Wetness exists everywhere, indifferent to the manifest, to waves, to storms, to streams. Spirit remains neutral with matter, energy, waves, states, collapses and so on.

3. Understanding quantum physics doesn’t make you an enlightened person. Physics offers an “it” – 3rd person – dual approach to reality whereas mystical experience flows in the “I”, the subjective non-dual self. Indeed, the “I” and the “it” can mutually inspire each other: I can have a mystical experience contemplating Schrödinger’s equations, and I can have a mathematical illumination during meditation. However science in general, and quantum mechanics in particular, because of their very duality, cannot offer the proof of consciousness, no more than a wave can explain wetness.

So, anything special about quantum physics? 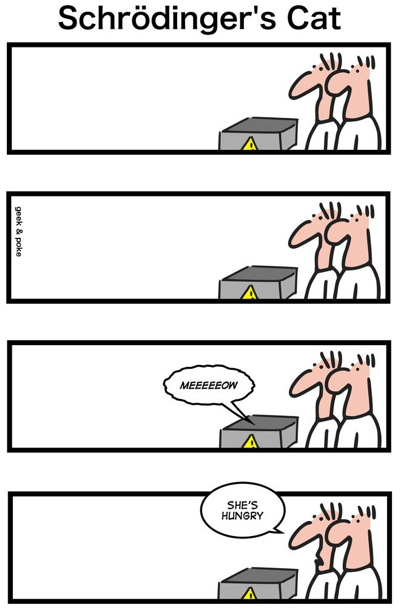 First, quantum physics releases us both from our familiar 4-dimensional universe of time and space, and from the trap of viewing the world as a collection of objects. It reveals a whole pluridimensional non-causal universe that quivers beyond the veil of reality built by our senses and mind. Every spiritual tradition has acknowledged the deeper infinite reality that pulses behind the veil. I don’t know any serious meditation practitioner that has not had this direct experience himself/herself. The Allegory of the Cave says it precisely.

Second, quantum physics reveals the connectedness, the unity, the non-local property of the universe (quantum entanglement and quantum non-locality). This means that every single object, wave, phenomenon, has a connection with every other object, wave, and phenomenon. Everything has an influence on everything, regardless the distance. Nothing happens in isolation and separated from all else. However this doesn’t imply that phenomena happen exclusively through causal relationships, which leads to the third point.

Third, quantum physics transcends (and includes) causality. Its phenomenology does not describe a deterministic, linear reality that appears to us as its surface. Causality still happens in the material world, but something more complex, multidimensional, non-causal, happens behind the scene. A big challenge arises here: human language has built its structure on depicting a dual world composed of objects and causal interactions between them. Yet it doesn’t have the capacity to describe and put in the social field a non-linear, non-causal, multi-leveled, ever transforming flow of reality. Words freeze objects, just like a picture. Today, only complex equations can describe the deepest levels of reality, it takes quite some metaphors to give a taste of this via conventional language. Most of the time, conventional language describes quantum physics in a causal way. Back to the veil.

These three points about quantum physics depict an objective reality that meditation naturally reaches subjectively, beyond the mental and its language limitations.

Let’s just not forget something: consciousness does not exist as a product of quantum physics. Quantum physics exists as a product of consciousness, both in the form of mathematical equations and in the form of conventional language. Our expressions (written, spoken, symbolic, artistic…) come from our experiences, just like the map comes how we see the territory. As far as I know we have never seen a map create the field.

The Power of Mind over Matter

Do we need quantum physics to prove that mind can control matter? Up to you to say…

In this video, I will show you how, by using the power of my mind, I can move a squash from one place to another (I love playing squash). Yes, I can move and influence matter, and you can too! It involves Newtonian physics, relativity, quantum physics, biology, chemistry, Darwinian evolution, genetics, thermodynamics, information and complexity theories, pataphysics, and many other “things” that will exist in the future. I swear that I used no tricks and that you see an unedited raw image. I can repeat this experience in any lab in the world, under full scientific scrutiny.

Yes, we kind of forget this very simple fact that our mind and will (or whatever you want to call it) move and influence matter all the time. Every single moment, I can enter in this ecstatic state feeling the aliveness of my body, I can enjoy my “matter in motion” device, I can play my musical instrument, I can move and assemble my Legos with the creative impulse of my soul.

Why not just enjoy this very radical power every single moment of our existence? Do you remember how amazing it felt when you landed in this plane of reality? Did you need quantum vinaigrette?