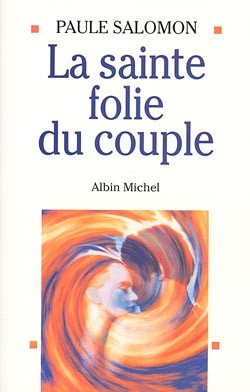 In her many books, the French writer Paule Salomon reminds us that thriving love can begin only after the inner couple has accomplished its marriage, once our masculine and feminine, our Shiva and Shakti, our Yang and Yin live, vibrate and celebrate fully in our psyche. Freed from the drives of need and compensation, the accomplished self becomes androgynous. He-she opens himself-herself to joyful celebration with other beings like him-her, nourished by the inner union. Two beings don’t meet anymore, but four, instilling in their amorous dance all the freedom they want.

Paul Salmon speaks about solar women and lunar men. I admire the richness of the ontology about love she has, coming from years of research. This ontology inspires my own work in collective intelligence where the question of the masculine and feminine holds a central place. Paule Salomon’s narrative also speaks to my own journey. I find myself in her words. Having your story spoken by another person than you doesn’t happen everyday 🙂

Here I would like to share a very beautiful passage of her book “La Sainte Folie du Couple” (the Holy Craziness of Couple). Paule Salomon details her vision of the lunar man better than what I could have written myself. It made me realize that one has to become either a solar woman or lunar man in order to experience love as I describe it in my series of articles “Sex, Sex, Sex“.

Lunar men, in the sense of reconciliation of the two poles, are in an evolutionary level where the psychic mind has supplanted the biological body. At the inner level, an important phenomenon happens, the one of self-presencing through the contact with the inner woman. Love isn’t that much external anymore, but internal, which doesn’t exclude, on the very contrary, the external woman. Lunar men are very appealing, as they have an idealistic side as well as a great flexibility. No doctrinal rigidity, a cheerfulness and a sweetness coming from inside that makes them very attentive to the moment. They are very present in love, very “cellular”, like the solar woman. Their body is vibrant and they like to arouse the body of the other. They are wonderful lovers, independently of the size of their sex, their age and their vitality. They establish a skin to skin communication, a psychological contact, they seek a soul communion. They like to receive caresses and surrender, to slip into a feminine passivity, solicit the active side of the woman during love. The harmony between the two masculine and feminine principles allows them to meet an inner fullness that makes them experience love in a different manner. Feelings like possessiveness and jealousy draw away, as well as feelings of rivalry, of affirmation by domination. Needs evolve, pleasure levels too. The behavioral harmony doesn’t obey to a moral demand, but to an inner need, to a taste. It is a matter of cooperating with the other just like we cooperate with our self, with the same friendship and the same pleasure.

But where is this terrifying warrior from patriarchy, the one who wants victory from all wars he creates in a repeated hurry as he fears inaction and his secret desire for contemplation? He stands still there, but his sword now serves the poet. He doesn’t dominate anymore. He has surrendered to other values than his own, he willingly comes into rest, the rest of the warrior. He keeps the fearlessness of the knight to invest himself in action.

The lunar man is free, on the path to liberty. He can deeply and intentionally commit into a relationship as well as he can step away from any commitment. However he has a part of him that remains implacably and consciously alone, wild, for ever rebel to any structure. He holds a happy and fertile solitude that allows him to contact his anima. Rabindranath Tagore describes this encountering in his last poems:

‘One day in spring, a woman came
In my lonely woods,
In the lovely form of the Beloved.
Came, to give to my songs, melodies,
To give to my dreams, sweetness.
Suddenly a wild wave
Broke over my heart’s shores
And drowned all language.
To my lips no name came,
She stood beneath the tree, turned,
Glanced at my face, made sad with pain,
And with quick steps, came and sat by me.
Taking my hands in hers, she said:
‘You do not know me, nor I you-
I wonder how this could be?’
I said:
‘We two shall build, a bridge for ever
Between two beings, each to the other unknown,
This eager wonder is at the heart of things.‘

This powerful awe seats at the very heart of things. The more the anima manifests itself in the shape of an image, a feeling, a music, the more the self is invited to live its inner rapture, the more it can land in the immediacy of the present and stop running after a never ending conquest. The lunar man has succeeded in joining sex, heart and sometimes spirit. This junction, even partial, allows him to thrive in love and kindness, with no deference. We feel well in his company, we feel a warmth, a wellness that can increase in the intensity of the exchange.